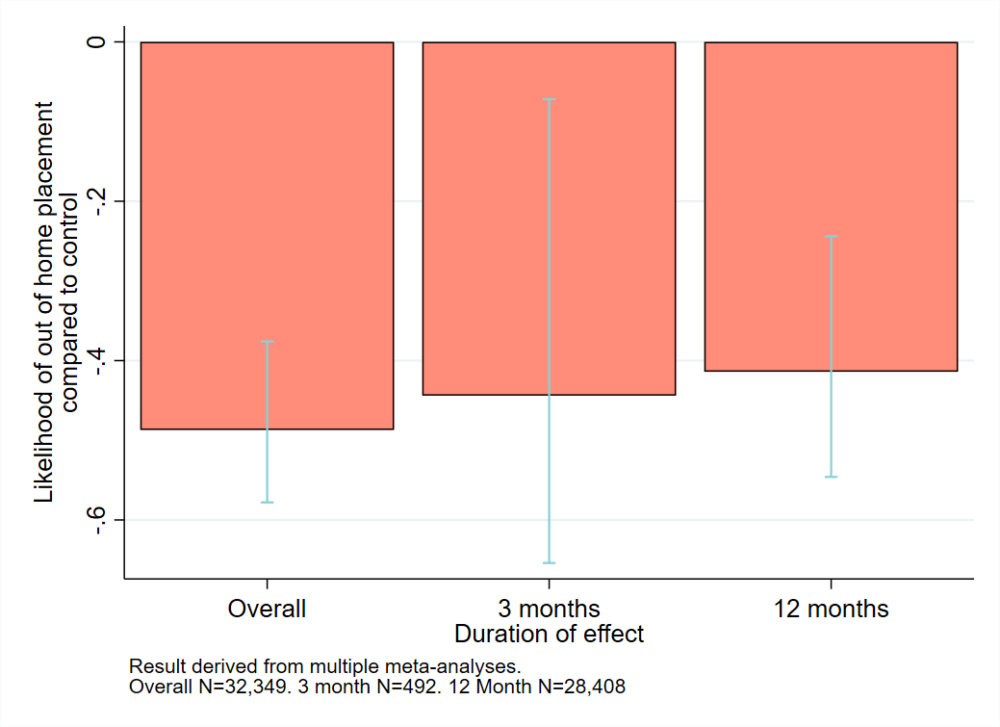 With the number of children being looked after in the care system at an all-time high, evidence that an intervention is effective in safely reducing the need for children to enter care is good news. This is why we are so delighted to share our latest review of Intensive Family Preservation Services (IFPS).

IFPS aim to provide short-term, community-based support for families. The service is tailored to the families’ needs and can include counselling, financial support and help with parenting techniques. Families are allocated a caseworker who is flexible and can be contacted 24/7.

Our review pooled the existing evidence from 33 studies to see whether this worked at keeping children out of care.

What did the review find?

First, the service generally seems to help prevent out-of-home placements for children at high risk of entering care. The risk of being placed in care was reduced by 49% for children involved in the service, compared to those who received usual services. There was evidence of a positive effect for identified children at 3, 6, 12 and 24 months after the intervention. For families, where the measure was any child within the family entering care, there was a significant decrease in placements overall but not at the individual time-points.

Second, IFPS varied in effectiveness suggesting that the quality of implementation is likely to be incredibly important. For example, core elements of the original model, such as ensuring that families are contacted within 24 hours of referral, are likely to be vital to the overall effectiveness of the programme.

Other contextual and personal factors are also likely to impact on the effectiveness of the service, such as the relationship between families and caseworkers. Families in one of the studies valued the caseworkers’ non-judgemental approach and good listening skills. One mother involved in the study described their caseworker as “my professional friend” and remained fond of both the practitioner and service many months after the intervention had ended.

What does this mean for practice?

The evidence to date mainly comes from the USA. While there is supporting evidence from Wales included in the review, the IFPS model does not seem to be widely used in the UK, although similar interventions by different names are used in many areas. The review demonstrates the potential value of offering the service to families in the UK. This is particularly important given the high number of children in care, and the priority given by many Local Authorities to reducing this figure.

The review highlighted the importance of how IFPS is actually implemented, so we are now working on a qualitative study to identify the key features that make the service work in the UK. By speaking to practitioners who are already involved in delivering the service, we hope to learn from their experiences and understand what is necessary to ensure that the service is effective. These findings will inform and guide practitioners who are interested in implementing IFPS in their area in the future.

If you are currently delivering IFPS and would like to be involved in our research, please get in touch by contacting cascade@cardiff.ac.uk