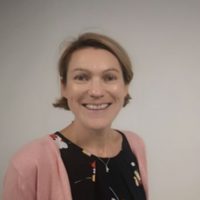 Jen Sebright is a children’s social worker for Leeds Children’s Social Work Services. Jen qualified in January 2015 with a Masters in Social Work from Bradford University. Prior to this Jen worked for Leeds Youth Offending Service from 2005 until starting her training in 2013. Jen began her career in social care in housing and supporting young offenders in their own tenancies.

Jen has a particular interest in Psychodynamic theory and the importance of the relationships as central to her work with young people and their families. Jen is also a firm advocate of the restorative approach adopted by Leeds in 2013, embedding it into her practice at every level of communication.

Jen feels passionate about evidence based practice having initially studied it for her Open University Degree in Youth Justice and following this during her Masters in Social Work. Jen has been a previous member of the practitioner’s panel and is looking forward to being part of the Stakeholders Advisory Group in order to support the next phase of What Works for Children’s Social Care.